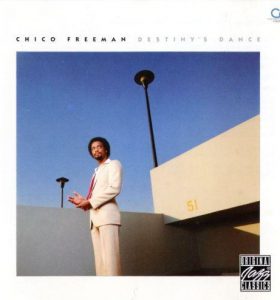 [tabs tab1=”AUDIO SAMPLES” tab2=”RELEASE INFO / PRESS”]
[tab][/tab]
[tab]By 1981, after six years of steady recording, Chico Freeman had gained a strong reputation as a flexible reed player able to play both avant-garde and fairly straight-ahead jazz. For this straight CD reissue of a Contemporary LP, Freeman doubles on tenor and bass clarinet in settings ranging from a quartet to a sextet. Trumpeter Wynton Marsalis (then just barely 20-years-old) is in superior form during his four appearances, vibraphonist Bobby Hutcherson is on all six songs, and also in fine form are pianist Dennis Moorman, bassist Cecil McBee and drummer Ronnie Burrage; percussionist Paulinho Da Costa guests on one tune. The music is comprised of originals by Freeman, Hutcherson and McBee that, although based in the foundations of the past (Freeman’s “Embracing Oneness” is dedicated to Duke Ellington and Thelonious Monk), also looks forward.

Chico Freeman inherited the sense of adventure and developed the big tone of his father Von, the Chicago modern jazz tenor saxophone pioneer. He put them to creative use as one of the young Turks of the 1970s who amalgamated elements of free jazz, the bop mainstream, and New Age sensibility. By 1981, when Destiny’s Dance was recorded, Freeman had forged a distinctive style and established a solid career. The music reflects conviction and passionate involvement. The sidemen include the young trumpeter Wynton Marsalis, vibraharpist Bobby Hutcherson, and Cecil McBee, whose commanding bass lines are a towering element of the album’s success.