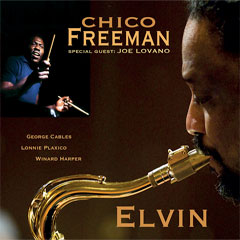 Saxophonist Chico Freeman credits the innovative drummer Elvin Jones for taking him on his initial tours of Europe and the major jazz clubs of the U.S., and for procuring and appearing on his first recording as a leader, Beyond the Rain, in 1978. It’s a viable pretext to assemble a formidable quartet, add guest star and second tenor Joe Lovano on two tracks, and dive into some of the songs that Elvin’s loose- and multi-limbed percolation helped make iconic in the jazz canon.

About the only listeners who will be disappointed by this collection are fans holding out for the freer, more experimental Chico Freeman from his early days with the AACM. This is a straight-ahead date that re-savors the crackling energy and piquant drama that Jones stoked for ensembles led by saxophonists Wayne Shorter, Joe Henderson and, of course, John Coltrane. Some of the songs, such as the rendition of Shorter’s “Mahjong,” from JuJu, are extremely faithful to the originals. Fortunately, the members of Freeman’s Elvin Jones Project play the material with an unconventional degree of intimacy, inspiration and expertise. Henderson’s “Inner Urge” is an ideal vehicle for Freeman to squawk and still shift gears smoothly enough to accommodate the song’s S-curves and hairpin turns—all while engaging drummer Winard Harper, who serves early notice that he’s well versed in Elvin’s polyrhythmic palette. Playing drums on an Elvin Jones tribute is an ultimately thankless task, however, and especially on the lone
Elvin original, the self-explanatory “E.J.’s Blues,” you wish the departed guest of honor would reemerge for a preposterously placed triplet or ride cymbal bash that would ambush your assumptions in a most pleasant way. But you can’t blame Harper for not being Elvin Jones.

Meanwhile, the sneaky star of this showcase is pianist George Cables, who played with Jones for nearly five years in Art Pepper’s group during the late ’70s. His sense of time is impeccable throughout, most notably on the two laidback Coltrane cuts, “After the Rain” and the modal “Lonnie’s Lament.” Whether his phrases linger and sparkle or thrust forward like a sprinter straining to break the finish-line tape, the emotion is palpable and contagious and the execution epitomizes old-soul mastery. Bassist Lonnie Plaxico rounds out the ensemble, which Lovano joins for the tricky Freeman original “Elvin,” and distinguishes with a delightfully poached tone on Cables’ “Think on Me.”