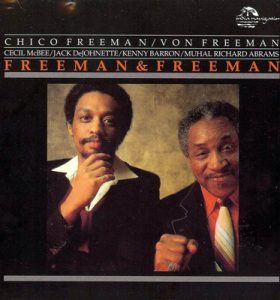 The two tenors Chico Freeman and father Von Freeman had an opportunity to team up on this CD. Recorded live in concert, the Freemans are assisted by pianist Kenny Barron (Muhal Richard Abrams takes his place on “Paying New York Dues”), bassist Cecil McBee and drummer Jack DeJohnette. Von actually sounds the more modern of the two (due to his unusual tone) on a set mostly comprised of standards, plus McBee’s “Undercurrents” and the lengthy jamming blues “Jug Ain’t Gone,” a tribute to Gene Ammons. The straight-ahead but sometimes eccentric music has its surprising moments, and the Freemans mostly battle to a tie.