Skip to content
Oh, By The Way… (with Guataca) 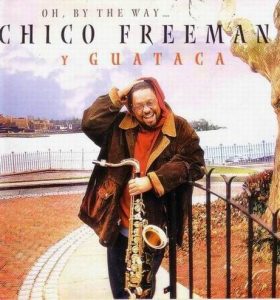 When people speak of Latin jazz, they’re usually referring to a blend of bop and Afro-Cuban rhythms — Cal Tjader, Dizzy Gillespie, Poncho Sanchez, and Mongo Santamaria are some of the names that immediately come to mind when one hears the term Latin jazz. But Latin music is vast; the cultural contributions of Latinos range from Mexican ranchera to Brazilian samba to Spanish flamenco to Argentinean tango.

So technically, Latin jazz could be anything from bossa nova to Miles Davis’ Sketches of Spain. Although everything on Chico Freeman’s Oh, by the Way has some type of Latin influence, not all of the selections are Afro-Cuban-minded. Afro-Cuban rhythms are a high priority on this post-bop CD; the post-bop/Afro-Cuban fusion is especially appealing on “El Mensaje,” “541,” and “Old San Juan.” But other times, saxophonist/pianist Freeman favors more of a post-bop/Spanish blend — on “La Luna” and “Guitar,” the saxman/pianist and his Guataca band demonstrate that post-bop and flamenco are an attractive, perfectly logical combination.

Although most of selections are instrumental, Freeman features rapper Akil Dassan on “Mambo Rap” and “Business as Usual” (which almost sounds like Eminem hooking up with an Afro-Cuban band). The interesting thing is that Freeman uses Dassan in much the same way that saxophonist Bill Evans featured KC Flightt and Ahmed Best in the ’90s; instead of being totally electronic, Freeman gives Dassan some honest to God musicians to interact with. Much to his credit, Freeman provides an album that is unpredictable and broad-minded but doesn’t sound disjointed or confused — Oh, by the Way, for all its diversity, has a certainly continuity.